In the past several years, I have used The Listening Program with numerous students who are on the autistic spectrum. We (the parents and I) have been very pleased with the results from using TLP.

A good example is Blaire (not her real name), a 3rd grade child, who first entered my office clutching her “blankie” and a stuffed animal. She wanted to sit on her mother’s lap during the first sessions. Blaire read at first grade level and would not speak above a whisper, unless she was angry with a sibling. I recommended TLP Spectrum with Bone Conduction and The Learning Ears Program.

Within two months, Blaire was speaking in a soft voice, not whispering, and her reading was improving rapidly, with instruction. One day toward the end of her individualized program, Blaire entered my office chattering and belly-laughing with her little brother. She was making good social and academic progress at school, a much happier child.

From March to November of 2012, testing showed that Blaire's skills made strong improvements. These are some of the most notable changes.

Blaire's mother reports that she loves school now, has been on the honor roll and even asked to be in the choir. Great progress for a child who would not speak above a whisper!

The Listening Program is a key part of my therapeutic practice for students who are on the autistic spectrum or who have other learning issues. I “don’t leave home without it”!

YES - Learning Problems Can Be Related to Diet

Much research shows that diet has a marked effect on the learning abilities of individuals. The lower GI tract (the gut) is also known as "the second brain", because so many neuron connections are there. The brain is dependent on a healthy gut for the proteins and neurotransmitters that are necessary for good cognitive processing. The health of "the second brain" affects mood and attention, as well as the immune system (read: allergies).

Yesterday a young mother called to talk about her son's needs. Among learning and attention problems, she mentioned that he also suffers from eczema (often traced to allergy to dairy). Casein in dairy and gluten in wheat, rye and barley, cause intestinal problems in many people.  In the rush to meet time demands, today's family may opt for a diet which includes lots of chips, cookies, crackers, pizza and breaded foods. Most contain dairy and wheat. A common daily diet for a student might be: granola with fruit and milk for breakfast, a sandwich or cheese pizza for lunch at school, snacks in the afternoon, a breaded protein, a vegetable and rolls for dinner and dessert (ice cream?). When it's time to do homework (and/or complete the work he didn't finish at school), he drags his feet or pitches a fit, requiring twice the amount of time that these tasks should take. No one is happy! And none realize that the child's "healthy diet" could be a major cause.

Mark Church, a Learning and Neural Development Specialist, gives (via Linked In) a good explanation of what can happen in the GI tract:

"From my learning and understanding about the link between gluten and casein and the effects with some people with autism is that, the peptides produced by gluten and casein should normally convert to amino acids and in some people don't. The peptides stimulate Glutamate which causes inflammation and the 'firing' between the cells in the brain and over-sensitivities to some of the senses. Glutathinone is the chemical that should inhibit the 'firing' of the neurotransmitters and help keep the balance, but this does not happen in some cases and their mind/body becomes over excited. By avoiding or reducing gluten and casein in the diet with some autistic people sensitive to wheat and dairy, it can help reduce the over-sensitivities and help keep their system calm.

I have seen a difference when wheat and dairy are excluded from the diet. Also in reduced bowel movements too, from being uncontrollable and soiling."

For this reason, I frequently suggest to parents of my incoming students to do a two week trial of no dairy/no gluten, and to look for and record changes in the student. Then add one food back at a time, carefully watching the response. In some students, ADHD behaviors improve and the student can settle down to learning. Sure hope this is helpful! 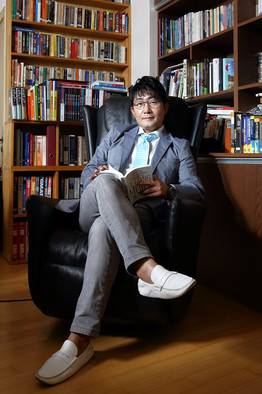 A very interesting Wall Street Journal article tells of the Mr. Kim Ki-hoon, who is described as "a rock star teacher".  Mr. Kim earns upward of $4 million a year as a private tutor, being in high demand for his lectures. The huge tutoring industry in South Korea has resulted in a dramatically improved education system over the past several decades. Almost 75% of students are enrolled in after school classes, with a resulting 93% high school graduation rate in South Korea (U.S. grad rate is 77%). SK 15-year-olds rank Number 2 in the world in reading, and 47% of eighth grade students are ranked advanced, compared to 7% of U.S students.

South Korean learning centers are called "hagwons". Hagwon directors reward teachers according to performance, number of students signing up for their classes, and student satisfaction surveys. Key questions in student surveys are: "How passionate is the teacher?" and "How well-prepared is the teacher?"  As noted in this article, teaching well is hard work (Mr. Kim puts in 60 hours a week). Teachers put in long hours, and the most productive teachers should be rewarded.

Learning/tutoring centers proliferate here in the U.S. and may take notice of the South Korean educational phenomenon in academic tutoring. However, real change for dyslexia or other learning problems depends on tailor-made one-to-one instruction and the parents' supportive engagement in the process.  As a private teacher/therapist myself, I see the reading and cognitive skills of my students improve and confidence increase.  When the student gains the needed brain (processing) skills, academic work becomes easier and makes sense to the him or her. Then motivation grows, and grades improve.

You may read the WSJ article here:  http://tinyurl.com/laluczo

Many of my students cannot comprehend what they read. Yesterday I ran across an article that could be so helpful for parents, I decided to post an excerpt here. The website is goodsensorylearning.com  (a good site to explore for parents or teachers).

Fun, Free Activities That Sharpen and Strengthen Language Processing Over the Summer Break
The old saying - If you don't use it you lose it - often describes the cognitive setbacks that many students experience over the summer months.  Exercising children's brains with engaging and fun activities is a must.  Here are 5 strategies you can use this summer to help your little ones sharpen and strengthen their skills.

How to Motivate Your Child to Earn Good Grades

What if your child just doesn't seem to care at all about those poor daily grades or that report card?

As an adult, you know that much of your child’s future depends upon the effort he expends in school and his attitude towards education. It’s not easy to motivate a chronic underachiever, especially if he’s dead set against participating in school or earning high marks. That doesn’t mean that it’s impossible, though. If your child isn’t performing well in school, there are steps you can take that may help give him the motivation he needs to boost that performance.

Determine the Scope of His Abilities

Before you start putting pressure on your child to try harder when it comes to schoolwork, you may want to consider having him tested by an academic specialist or seen by an expert to determine the scope of his abilities. He may be suffering from an undiagnosed learning disorder or having difficulty processing information, which means that he could very well be working his hardest to achieve the mediocre grades he’s getting. Keep in mind that being diagnosed with a learning disorder is far from the end of the world for your child; in fact, once you’re able to determine the best ways of teaching him, you may find that his academic performance increases dramatically. Either way, it’s still important to know where he rests on the spectrum before you berate him about a lackadaisical attitude when he’s actually working as hard as he can to impress you.

If you’ve determined that your child has no learning disorders or processing difficulties, there’s a good chance that he’s struggling in school simply because he’s not motivated to work any harder than he is now. Frustration at his apathetic attitude and refusal to work can make you itch to lash out a bit, but you should keep in mind that criticism isn’t likely to make the situation any better. In fact, it may very well make things worse by damaging your relationship with your child and making him even more sullen and disinterested in school.

Even if you mean well, comparing your child to a sibling or his classmates will almost certainly backfire. Your child is not his brother or his classmate, and it’s important for you to realize that. Setting these standards that your child feels are unrealistic and unattainable will only discourage him more. If he knows that he’ll never live up to the people you’re comparing him to, then he may feel like there’s no point in trying at all. Asking your child why he can’t perform as well as his sister or best friend is downright insulting, and ultimately counterproductive.

Think Before You Bribe

When you know that your child is capable of better grades and you’re desperate to find a means of motivating him to do his very best, it’s easy to reach for your wallet. Before you bribe your kids to bring up their grades, think about the message that you’re sending. Knowing that there’s a cash prize hanging in the balance may entice your child to cheat in order to reach the goals you’ve set for him. It also makes him look forward to getting a good grade for the sake of earning a reward, not taking pride in the feeling of earning good grades themselves.

It’s essential that you know just how much your child is capable of, and that you place an emphasis on praising his efforts over praising his accomplishments. When you offer your child encouragement and positive affirmation for trying his best, he learns that the value lies within making his best effort, not just reaching the goal by any means necessary. Help your child learn to be proud of how hard he works, even if he’s not always reaching the brass ring. The value is in the determination, and your child needs to know that.

If your child’s performance simply isn’t reaching the level that you know he’s capable of, it may be time to discuss the matter with his teachers. They will almost certainly have more insight into his classroom habits than you will because they’re observing him directly, and may be able to give you some valuable tips for motivation and encouragement that will work with the unique needs of your individual child.

Thanks to aupairjobs.com for this helpful article.  I want to add that many times help is needed outside the schools. Expert assessment of the student's processing skills can shed much light on the roadblocks which may be causing poor motivation. If your child feels defeated due to slow processing speed, visual muscle imbalance, or poor decoding skills, NOW is the time to act, before bad attitudes are confirmed and self-confidence is in the basement.